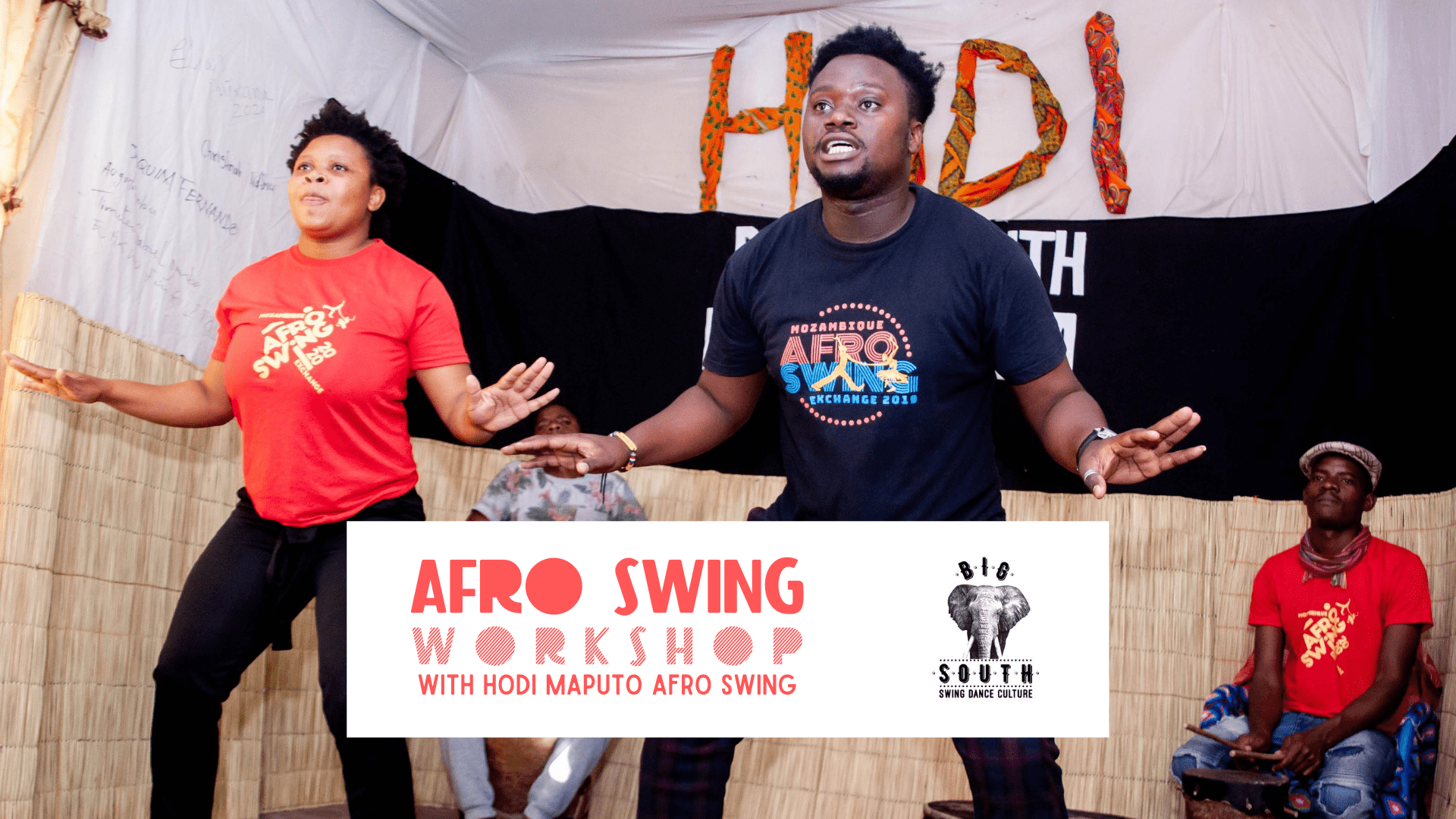 What a way to start the new academic year!!! Big South is super excited to collaborate with Hodi Maputo Afro Swing, to learn through them about the roots of Swing Dance and to set a deeper connection to their culture. Don’t miss the date!! (More information about Hodi Maputo, downbelow)
ZOOM LINK:
https://us04web.zoom.us/j/7284224431?pwd=cDBzUXFIVFYxTEJ2YlEraFhGZXUvZz09
Meeting ID: 728 422 4431
Passcode: 659613
****Please support these great artists by donating in here:**** https://gf.me/u/x3wn33
———————————————————————–
SCHEDULE (GMT +2):
>> 7 – 8 PM: DANCE CLASS with LIVE MUSIC:
We will explore Mozambican traditional dances mixed to swing dance steps and learn the similarities or what we can find in common in these steps and moves.
>> 8 – 8:30 PM: ROOTS TALK:
The teachers will talk and reflect about the roots of swing dances and also share their experience in spreading an Afro-American dance in Africa.
———————————————————————-
TEACHERS:
– Eugênio Junior Macuvel: he has been a choreographer since the age of 14 and the Artistic Director of Hodi Maputo Afro Swing since the start of the company in 2014. Dancing and singing was a natural part of Eugenio’s childhood.He has through the years put together choreographies with up to 50 dancers on stage, produced many artistic pieces on major stages and has performed and choreographed in different parts of the world such as South Africa, Sweden, China, Macau, Germany, Netherlands, France and Brazil.
– Judite Olivio Novela: she started dancing traditional Mozambican dances in 2007 with the dance group Manemba and has since then always been on the front foot to learn new dances such as contemporary, house, swing or hip hop. She has also participated at Herräng Dance Camp in Sweden, worked with contemporary dance with the international choreographer Horácio Macuacua and with other international artists.
– The brothers Elias and Augusto Manhica: they are known as the “Gemeos Manhica” (Manhica Twins), started their first music, song and dance cultural group in 2003 called “Criancas da Paz”. They later created Hodi Maputo Maputo Afro Swing Cultural Association, of which Elias is the president and organizer of the annual Maputo Afro Swing Exchange, and Augusto is the musical director and drumming instructor.
——————————————————————————-
About HODI MAPUTO AFRO SWING:
Hodi Maputo Afro Swing have been teaching their energetic fusion of swing and African dance out of Mozambique since 2012. They’ve been running the festival Mozambique Afro Swing Exchange since 2014, as well as teaching around the world (including at the Herrang Dance Camp).
Due to Covid-19 the MASX 2020 festival unfortunately had to be cancelled, and the group’s other shows and teaching were put on hold. So, there is a GoFundMe to support the project, to ensure the teachers can survive this difficult time and be able to run the festival in future! https://gf.me/u/x3wn33
————————————————————————————
Thank you very much for attending this event!!!!
+ Google Calendar+ Exportación de iCal

Any cookies that may not be particularly necessary for the website to function and is used specifically to collect user personal data via analytics, ads, other embedded contents are termed as non-necessary cookies. It is mandatory to procure user consent prior to running these cookies on your website.