Interview with Enric Peidro Swingtet, one of our guest bands 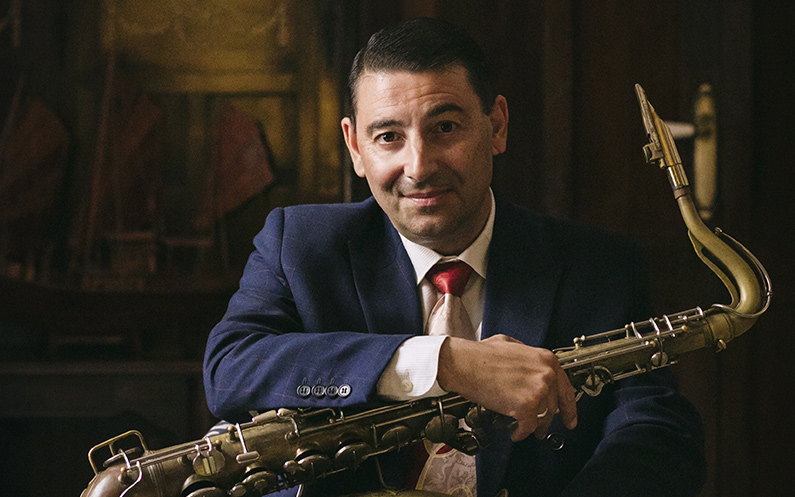 For the last few years, the bands that played at the Madrid Lindy Exchange were local but, this year, we want to introduce you to the first band that comes from a different city and that has delighted our local dancers these last two seasons: the Enric Peidro Swingtet.

Enric Peidro, the tenor saxophonist, is influenced by great saxophone players of the swing era, such as Lester Young, Ben Webster or Coleman Hawkins. He’s a very solid player well versed in jazz language. He’s also an ever-evolving musician who delves relentlessly into the knowledge his teachers had of musical language and is absolutely sure that this kind of music is timeless, which is something that he demonstrates in all his concerts and that makes all his performances a truly unique experience. Setting aside his sporadic collaborations with bands and soloists –national and worldwide–, Peidro is normally the leader of his own steady bands: his trio, quartet and sextet. This last one, which sometimes adds a seventh or eighth musician and is called the Enric Peidro Swingtet, is the busiest one and the one that’ll perform at our 6th Madrid Lindy Exchange.

Your gigs of danceable swing are Madrid’s sensation this season but there’s still people who haven’t had the chance to enjoy your swing, what can they expect from Friday’s party?

They will find a very experienced band, with steady players and a rather extensive repertoire. But, above all, they’ll find a band that likes to play for dancers and that I think is capable of transmitting the enjoyment they feel themselves.

You insisted on playing an acoustic session, with as little instruments that need amps as possible, in which you have described as “a no turning back decision”. It’s a great risk with a huge room full of dancers, why did you decide you wanted to do it and how does it contribute to the music we’ll listen and dance to?

Well, it was a decision we made almost a year ago and it has not only worked out perfectly but given us great gratification. The idea comes from my not wanting to distort the music that we play with way too much unnecessary amplification. The presence of monitors, directional microphones and such paraphernalia is more related to rock, pop and other kinds of music than to the music we play, so we aren’t actually in need of all these tools. I must also add that this type of performances, mostly acoustic, is not a complete novelty but quite the opposite: this is how it has always been done –even though, the tendency to reach louder volumes in most musical contexts has, gradually and constantly, expanded and become the rule. As far as we’re concerned, we decided to “turn our volume down” so to speak, in order to let go off these situations that aren’t beneficial and don’t contribute in any way to our music. But I want to set the record straight once more: it’s not a “snob” decision but a more complicated and well-considered one, which simple purpose is to present our music with the best quality possible. And I think that this option adds beauty and easiness to our sound as a band.

In your repertoire there aren’t many popular tunes like the ones we use to hum in the shower. You said you wanted to rediscover songs that bands don’t usually perform, what are those songs and why did you chose them?

My criterion when choosing our material is generally quite simple: I play the tunes that I listen to and that, for one reason or another, draw my attention. It’s not that my main goal is finding or recovering songs. It’s rather that I like listening to music and, as a result, I discover lots of high-quality material. And, whenever I find something that I like, I don’t really care if it’s popular among people or if bands play it a lot; if I like it and feel like it, I play it.

You’re the bandleader of your own bands, a sideman to world famous musicians, each year you have more and more albums out… what is missing professionally speaking?

I actually feel very lucky because I do what I love. If something, I can tell you that I’ve been working for several years in a musical project a little bit more ambitious –because it involves more musicians–, which connects two of the things I’m most passionate about: jazz and film noir (I’ve been a huge fan of film noir since I was a teenager). It’s a project that I hope will be ready by 2020 and that, even though it might not be very different from what I do now, it’ll broaden a little my field of action; and I think that all jazz and swing aficionados and film fans will love it.

What’s the secret to a jazz band that plays danceable swing to finally be listened to by the dancers?

Regardless of the quality of the band, I like to think that music that is played with passion and sincerity goes straight to the heart and maybe that’s the reason why people are stopping to listen more thoroughly. Even I sometimes stare self-absorbed at the dancers and miss the moment I’m supposed to start my solo (laughs).

One or other way, we can’t wait to have the Enric Peidro Swingtet at our party and enjoy their talent and good taste. Thanks, Enric!